Below is some information about the history of our buildings and our church community. We really value having a long connection to the past in our place. We’ve inherited buildings and structures that continue to serve us well. But more than our local history, we belong to a tradition of faith that stretches back beyond the church of England, right back to Jesus Christ himself – and he is from before all time.

Our deeper story is that all of us were lost, but God in his mercy reached out to us in Christ Jesus. He brought us to himself and so brought us together. Our history, like us, is far from perfect but we hope that our history offers a testimony to the mercy and grace of Christ to the people who have been in our congregations through the generations.

On 27th October 1866, at Caleb Massinghams’ cottage this tiny isolated settlement saw the need to establish a Church of England Church. There was no religious instruction and about thirty children growing up in the area. Mr. Waldeck proposed that a church be built (Town Lot 1 Waldeck and Church Streets) and a cemetery consecrated and it was seconded by Mr. Green. Also a Rectory be built on Lot 19 Waldeck Street.

In about 1871 Mrs. S. E. Moore arrived as a bride to Dongara and she was appalled at the conditions and wrote to her father, a congregational minister in Perth, that there was “no church, no school, no anything”. Her father suggested that she start a Sunday school. Mrs. Moore’s husband canvassed the local farmers. The following Sunday she was confronted by a gathering of over thirty adults, both men and women, and about as many children.

On 3rd August 1873, Bishop Hale held a Confirmation Service in the Irwin Schoolroom and then went on to consecrate the cemetery at Dongara, “Cemetery at 3p.m. – quite a large attendance. Beautiful day. The gathering in the thicket and the ceremony very striking, Evening Service 7p.m. Good congregation, Nearly all Dongarra must have been on the move for all the services, literally from morning to night”. The Church was a reality despite the absence of a building, due to the interests of Mr. and Mrs. Moore. Both Methodist and Anglican services were held in the schoolroom and at a later date, Mr. Moore brought his wife a harmonium. A fine choir also came in to being.

Concerts and bazaars gradually brought in the money and the foundation stone was laid in 1884 with the Church being designed by Francis Bird and built by William Henry Linthorne. On 28th June 1885, four days after St. John the Baptist’s feast day, the Right Reverend Henry Hutton Parry, second Bishop of Perth, consecrated the Church. Ministers have been in Dongara from as early as 1878.

The spacious Rectory was built in 1882 and was the first financial undertaking. Both Church and Rectory were built from solid blocks of limestone from the local quarries. When Mr. And Mrs. Moore left Dongara in 1901, the church was free of debt.

The Norfolk Pines that surround the Church were planted in 1938 by Walter & Keith Russ, Church wardens and Secretary/Treasurer at the time.

In 1962, the town and district were handed over from the Perth Diocese to the Diocese of North West Australia.

In October 1965, the two Parishes of Greenough and Dongara were amalgamated with locally born Rev. Geoffrey Plester as Rector.

In 1983 the original floorboards in the Church were replaced with Jarrah flooring by voluntary labour and the carpet donated by Mrs. E. Clinch was re-laid.

In 1983, St John the Baptist Church was classified by the National Trust. 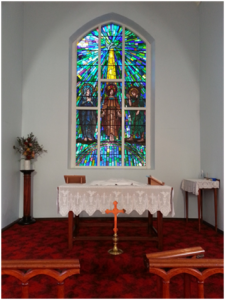 Due to the windy weather, the Porch was built across the doorway of the Church by Errol Tilbrook. The Porch and Memorial Window was dedicated and blessed on 29th March 1987 by Bishop G. Muston. Also on 29th March 1987, Bishop G. Muston opened the Meeting Hall that was also built by Errol Tilbrook with funds from the efforts of the St. Johns’ Ladies Guild.

St John the Baptist Church was entered on the Register of the National Estate in 1993 and on both the State Register of Heritage Places and Shire of Irwin Municipal Heritage Inventory in 1998.

The Church roof cladding was renewed in 2005.

A Draft Conservation Plan was compiled by John Taylor Architect in May 2010 so that the cultural heritage and significance could be maintained for any future use and development. 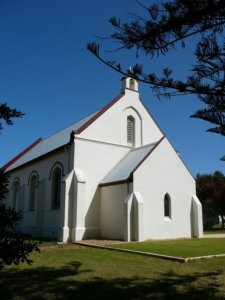 Source of these details are based on articles written by Mrs Sybil Blake, from the Irwin Districts Historical Society and the Anglican NWA Diocesan Archives

On 8th May 1903 Miss Clementine Nairn laid the foundation stone for the Church of the Resurrection to be built. Reverend John Alban Brown officiated and his name is inscribed on the church font.

The first wedding was solemnised in 1903 between William Shepherd Oliver of Mingenew and Bessie Alice Johnson of Dongara. It is believed that the Church was finally consecrated by Bishop Riley on 18th June 1904, close to the first anniversary of the lying of the foundation stone.

In July 1908 Mrs. Elinor Oliver then laid the new foundation stone after the new porch, chancel and vestry were completed. These were consecrated on 29th August 1909 by Bish 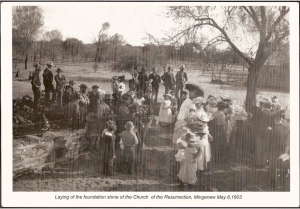 In 1910, the Reverend Ernest Gill travelled from Dongara, often by bicycle to conduct services in Mingenew and on various properties. The Church minutes at the time stated that they were looking for a caretaker for the Church and so “application was invited for the position of caretaker of the church, and the job description was to sweep, dust, and clean, and light the lamp, wash the floor twice during the year, and to ring the bell at services, all for a fee of 8 pounds per annum” 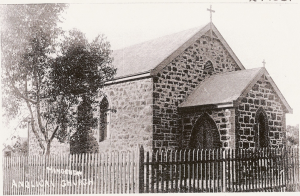 In 1911 a meeting was held to establish Mingenew as a separate parish or parochial district whereby Mingenew would be the centre, Discussion took place regarding the purchase of a block of land adjoining the church, from a Mr. Robert Herbert, for the rectory to be built. Mr. Chas Hope’s tender of 133 pounds was accepted for the construction and a well was also sunk. The Midland Railway Company was approached for 100 sleepers for the purpose of erecting a stable, chaff shed and horses were brought.

So in May 1912 the Reverend Ernest Groser arrived to his first parish in Mingenew and made his way around by horse to many new settlements as are recorded in the register of Services. The extent of his travels took him to Mannarra, Merkanooka, a new settlement north of Morawa where service were held in the school house or private homes, to Pintharooka, South Morawa, Dudewa, Arrino,Three Springs, Carnamah, Winchester, Coorow, Latham Rock, Perenjori and Nangetty shearing shed. Many of these settlements were relatively new. Finances were in short supply and in 1914 the parish was really struggling. Messes Lover and Russ reported that “owing to the drought, the arrangements made to crop 100 acres Mr. Kerr gave for free use, had unfortunately proved an utter failure consequently no income can be expected from this source.”

Reverend Groser finding finances in such a predicament offered 15 pounds in 1915 to the vestry as help towards buying seed from Mr. T Wells for a cropping venture. The Vestry of the day also came up with enterprising ideas of fundraising card playing parties and Rev. Groser was strongly opposed to this unprincipled idea but he was overruled. Ernest stayed until his term ended in August 1916. Rev. E.W. Groser was the one an only priest to live in that Rectory in Mingenew that was built in 1912 and was sold for 200 pounds in 1952. He married Amy Hamersley who was attending Walkaway Church and played for services at Greenough. He resigned from the priesthood and took up farming near Manjimup until his tragic death.

The Church Guild was formed in 1948 and its first meeting was held at the bank residence of Mr. and Mrs. Urquhart. It is through its fundraising and community events that the Church has been supported over the years.

Dr. R. W. H. Moline, the Anglican Archbishop, of Perth, on Friday 16 March 1951 instituted the Rev. J. W. A. Copeland as rector of the parish of Dongara-Mingenew.

Although situated in the Irwin parish, since September 1953 the Church was placed under the care of the Morawa-Perenjori ministers. Renovations still took place such as the higher sanctuary area being lowered and a new altar dedicated on 18th August 1955. The corrugated iron roof was replaced with tile in 1962.

By 1966 Reverend Albany records that “it was the first time in 50 years that we now again have a resident Rector and that he and his family were accommodated in a rented house in King Street.” He was succeeded by Reverend Idris Jones who saw the opening of a new ‘transportable’ Rectory at his induction as new minister in 26th April 1969. When Idris left in 1972 the transportable Rectory was taken to Carnamah.

Over the next year Mingenew was supported by Ministers from Dongara, Three Springs, Morawa and Carnamah and then in 1974 Mingenew officially left the Perth Diocese and joined the North West Diocese, Parish of Dongara, Greenough and Walkaway. 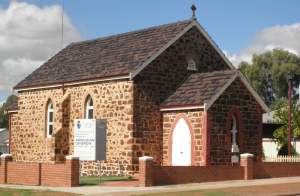 Greenough and Walkaway Churches were reallocated to the area covered by Holy Cross Cathedral from 1st April 1994.

In preparation for the Church’s centenary, a new brick fence was erected in March 2003. The Centenary on Sunday 4th May 2003 was quite a celebration which also included the confirmation of 2 adults and 6 teenagers from the local area by Bishop Anthony Nichols. The service was followed by lunch & historical display in the Shire Hall.

The toilet block was acquired from the Expo in 2009. A mural depicting the Church building was painted on the toilet block by Rayleen Spencer and the Mingenew Painting Group in April 2013 in time for the 110th Anniversary celebrations.

Source of these details are based on articles written & provided by Mrs Jill Ward, and the Anglican NWA Diocesan Archives